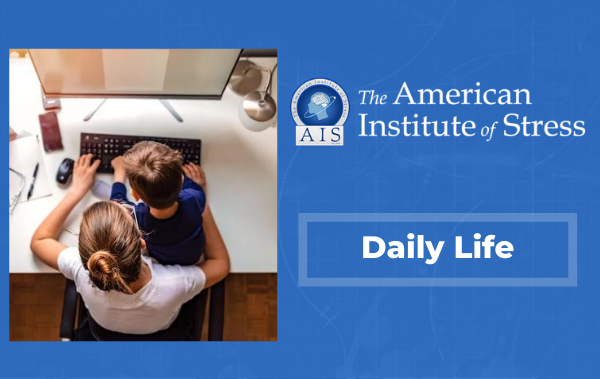 Lindsay Malloy, mom to a 5-year-old son and 3-year-old daughter, found herself paralyzed, unable to focus on anything except the deluge of terrifying headlines on her smartphone. Her husband dubbed it “panic scrolling.”

Sound familiar? But Zelechoski and Malloy are psychologists, and so they also responded in a way most parents couldn’t: Within days of plunging into coronavirus craziness, they launched separate studies looking at how families are coping (or collapsing) in the face of added stress and anxiety. “I went from, ‘This is bad,’ to ‘This is something we can learn from,’ ” says Malloy, an associate professor of forensic psychology at Ontario Tech University.

As the results rolled in, the psychologists began to identify patterns and strategies that could be helpful for parents right away, said Zelechoski, an associate professor of psychology at Valparaiso University. But through normal scientific channels, no one would get a look at these findings for at least a year.

That’s why the pair teamed up to create Pandemic Parenting, a web platform for sharing the latest science-based research. This week, they launch the first of a series of biweekly webinars, which they’re calling “Pandemic Parenting Exchanges.” Just as health-care workers require personal protective equipment to do their jobs, moms and dads need a different form of PPE for theirs, Zelechoski says. She and Malloy — along with guest psychologists and experts — will answer questions and provide “takeaways parents can try tomorrow,” she says.

Zelechoski came up with the idea a few weeks ago while on a run, her now-regular way to take a break from her brood. With the start of the school year on the horizon, “I was realizing we were about to enter Round 2,” she says. In increasingly panicked conversations with other parents, it dawned on her that most of them hadn’t had the benefit of her scientific training. For example, why can’t you figure out what to cook for dinner tonight? Blame decision fatigue, which is bound to set in when every step outside seems to have life or death consequences.

“We don’t have all of the answers,” cautions Malloy, but they have some tools to help parents understand their family’s behaviors and emotions. The idea is to talk about scientific stuff in a relatable, keeping-it-real kind of way. “We know the best things according to the research. But that doesn’t mean we do them,” she says.

“We have to do what’s feasible now,” adds Zelechoski. “We’ll talk about questions we’re getting, what we’ve done that’s worked and not worked. We’re struggling even with this knowledge. We’ll be honest about things that we’ve screwed up.”

In the case of Zelechoski’s family, all of this togetherness has led to constant clashes between her two oldest kids. The good news is there’s been a lot less bickering since she and her husband mandated quiet time for all five of them every afternoon. Ostensibly, they’re doing it because of the 4-year-old’s nap. “But it has ended up being this beautiful reset time we all know we can rely on and be alone,” she says, noting that this is feasible only because of their large house.

Zelechoski and Malloy are well aware of their privilege, which is why they’re not charging for Pandemic Parenting and they’re committed to making all of their webinars and other resources freely accessible to anyone who needs them (although there is a link on the site for visitors who want to chip in to help cover production costs).

Fittingly for a coronavirus-era project, the partners have only really ever spoken on Zoom. They linked up in the past few months when they realized they were posting similar material on social media.

Before this collaboration, Malloy — who lives in the suburbs of Toronto — just knew that Indiana-based Zelechoski was another face at the annual American Psychology-Law Society conference (which they both attended in New Orleans the first week of March, just before schools shut and toilet paper vanished from store shelves). Although they had never formally met, “I could pick Amanda out of a lineup,” says Malloy, whose research focus is normally on how kids remember and report their experiences in the legal system.

Zelechoski’s specialty is trauma, something that she quickly realized would be a devastating side effect of the pandemic. Her first thought when she decided to scrounge up the funding for coronavirus research? “Maltreatment rates are going to skyrocket, and schools won’t have eyes on these students,” she says.

Her team’s survey, which was completed by 450 families in the United States, asked about variables including employment status and level of social support, and posed a series of open-ended questions. (For parents, “What are you most worried about RIGHT NOW during this stage of the pandemic?” For kids, “What are 3 ways coronavirus has impacted your life?)

Malloy and researchers at several other sites in Canada and the United States crafted their survey — which had 1,500 respondents — to target some of the same areas but also looked at parent and child “tolerance to uncertainty” and how families are talking about coronavirus. There’s earlier research from her colleague Jonathan Comer, at Florida International University, that in the aftermath of the Boston Marathon bombing, kids whose parents avoided discussions fared worst, she notes.

Although there’s already a lot known about how kids respond to traumatic events, this situation is unique because of its extended nature and the social isolation aspect, Malloy explains. “My ultimate goal is to follow up with the kids to find out what they remember and record based on age,” she says.

For both Malloy and Zelechoski, these surveys mark a departure from how they would ideally conduct their research. Distribution through social media channels translated into participants who skewed higher-income and more educated. “People who are really struggling don’t have time to fill out a survey,” Malloy says. And kid responses are filtered through a parent, who had to ask the questions and type the answers, notes Zelechoski, who would have preferred to talk to kids face to face.

But that’s the reality of most research in a period of social distancing — at least for now. Malloy has been attempting to boost her online research karma and find new activities for her kids by signing them up for studies they can do from home. (Her youngest was just filmed dancing in their living room to her favorite song, Beyoncé’s “Single Ladies,” for a music study.) Depending on how long the pandemic goes, maybe more families will get comfortable with participating this way, she says.

“To School or Not to School” is the topic of this week’s webinar, and another is scheduled for later in the month about how to talk to kids about the coronavirus. But the schedule has been purposely left open beyond that so Zelechoski and Malloy can be flexible about what they’ll discuss and for how long.

No one knows yet whether Pandemic Parenting is a temporary project or a multiyear endeavor. “We’ll have to see the long-term effects,” Malloy says.